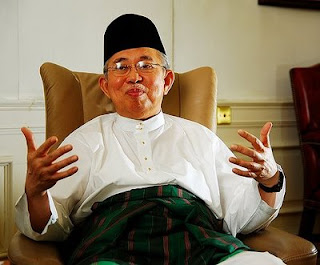 Had Barisan Nasional won the 1990 general election and conquered Kelantan, the remote town of Gua Musang would have been developed into a unique 'landlock' city to complement the development of Cameron Highlands.

I remember Tengku Razaleigh Hamzah used to unveil his ambitious plan to transform the 'godforsaken' area into a new township within 5 years, provided that the ruling party manage to take back Kelantan from Pas. Some said it would have been larger than Kota Bharu.

That was his dream. I am sure Ku Li still have its blueprint kept in his closet and mind frame.


And now that Cameron Highlands is just about 90 minutes drive from Gua Musang, that dream comes alive again.

"I believe Gua Musang will emerge as a new township, if not a city in 10 years. It is complementing the development of Cameron Highlands in many aspects, especially in providing easy passage for local and foreign tourists from Kelantan, Terengganu, Pahang and even Thailand," he said.

Indeed. Gua Musang is now fast developing. The new Federal road linking it to Cameron Highlands is injecting a catalyst to the once-known 'a logging' valley. It adds zest and provides fresh ideas to developers from Kelantan and other states to seize the business opportunity which is now abundant.

More budget hotels, shopping arcades and shop lots were built over the last few years since the opening of the Gua Musang-Cameron Highlands (GM-CH) road. I am much impressed at the development pace taking place, especially its new township.

"Its amazing seeing a dead place coming alive again," said a friend who last visited this town about 15 years ago.

It also fascinates many who flocked the town a few days before nomination of candidates for the Galas by-election.

About 10,000 outsiders are putting up in Gua Musang until polling day on November 4. It causes massive traffic congestion everywhere, turning it into a 'little Vegas minus the casinos', according to a blogger.

More visitors, mainly party members are expected to arrive before polling day, and it is not a surprise that some of them rent hotels and chalets in Cameron Highlands.

I am beginning to feel very comfortable here, and so are the rest of my team members. I have been up there (CH) twice since Monday. After covering so many by-elections, I think Galas is most interesting, not because of the tough fight to be expected but its atmosphere. And I think I added 1kg because of the food!

Let's hope for the betterment of Gua Musang. I also pray for the voters in Galas to opt for BN. I believe Ku Li's dream will become a reality if the ruling party is given the mandate to continue his plan for GM.

Agree and also think that Gua Musang can be 2nd most ideal place leave in apart of Kota Bharu.